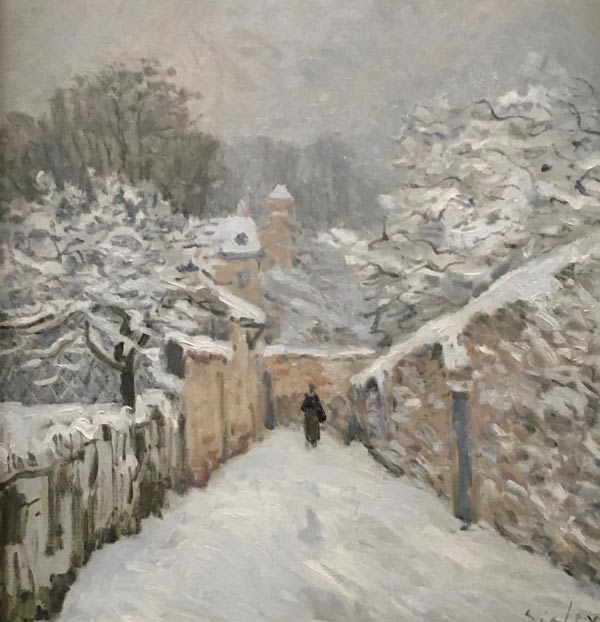 Welcome to the Winter 2019 Newsletter!

What a year 2018 has been, full of unbelievable gifts, challenges as well as opportunities!

There were amazingly creative seminars!

We delved into the plant realm with the green monks, led by Barb…

Explored the Tree of Life and Jewish Mysticism with Barb.

We are learning to think with our hearts, increasing our capacity to keep world events in perspective and hold compassion for ourselves, while extending empathy toward the world at large. The Advent Gathering on December 10 was one of the best ever! The artist in all of us emerged to make our Nativity figures come alive to possibility and the City of Bethlehem absolutely glowed with the promise of heaven coming to earth.

Who is the Black Madonna and why is she important?

There are hundreds of Black Madonnas throughout Europe. My pilgrimage through Spain and France led to many and I am anxious to share her story with you. 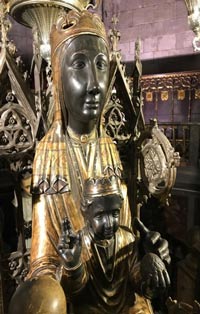 The famous Lady of Montserrat is depicted here.

Included are images of other Black Madonnas. They are diverse and can be seen in small churches of remote villages, great churches or in museums.

The Black Madonna has her roots in the great goddesses of the pre-patriarchal period, including Inanna, Lilith, Artemis, and Isis and many resemble these goddesses. Often the child is depicted as a small king rather than baby, holding an orb or globe.

History suggests that the Church of Rome suppressed the “Church of Mary”, which was driven underground. In the 12th Century the Grail Quest was linked with the quest for the divine feminine. 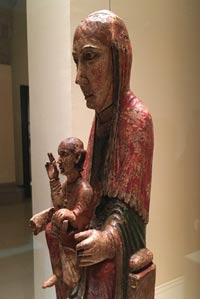 The Knights Templar carried many of these figures to Europe from the middle east during the Crusades. Bernard of Clairvaux played a leading role in the development and leadership of the Knights Templar and the cult of Mary during the 12 Century. He focused on intimacy with the divine, preaching over 80 sermons on the “Song of Songs” alone!

Black Madonnas are symbolic of the human-divine connection. Clairvaux took the blackness of the Madonna as symbolic of humility. He revived interest in Mary Magdalene as unique human capable of accurate witness to the mystery of the divine and offered validity and support to the mystic Hildegard of Bingen. The Templars and Cistercians were devoted to images of the Divine feminine and the importance of feminine images to the spiritual world. Cistercians were involved in transformation of the landscape, agents of the earth, farms, vineyards, and were connected to the divinity of earth.

In Jungian terms, she is considered a shadow figure, representing those parts of us, and those of the world, which are unexpressed, misunderstood, imprisoned, persecuted, buried, hidden, or mysterious. She calls to mind the darker elements of our nature, inviting themselves to be equally owned. She has come to stand for justice for the oppressed and the necessity to embrace nature. 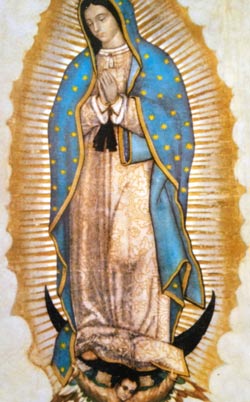 Legend has it that Black Madonnas had often been unearthed by animals, esp. bulls. It is interesting to note that the mythic bull is associated with the moon, which as it waxes and wanes, influences the tides, thunder, lightning, and the rhythms of the womb. The bulls horns, emblems of the crescent, are considered a source of life giving fluid and account for the animal’s magical powers of fertilization. The bull is revered for having power to make vegetation grow. This may underlie the symbolic use of horns into the Christian era, where Mary is seen seated atop the crescent moon, as in the depiction of Lady Guadalupe standing on the crescent moon/set of horns.

What is the importance of the Black Madonna in our time? Perhaps she is, as Wallace Stevens says, “…the necessary angel of earth, since in my sight you see the earth again.”

Jung, from The Undiscovered Self notes, “We are living in what the Greeks called Kairos-the right time-for a metamorphosis of the gods, ie of the fundamental principles of symbols.” If this is the Kairos moment, how can we decipher what the Black Virgin is trying to say to us? How can we best listen?

…and as Sardello says,…“This is the age of opening of the heart in a more collective way, for only through the forces of the heart can humanity become aware of the travails Earth undergoes, to actually feel earth as a living Being, and consciously join our being with hers.”

She reminds us that earth and spirit are not really separate. What if we could “see”with her perspective? Is there any greater time to comprehend the Black Madonna, to honor the earth as Our Spiritual Earth Sanctuary? 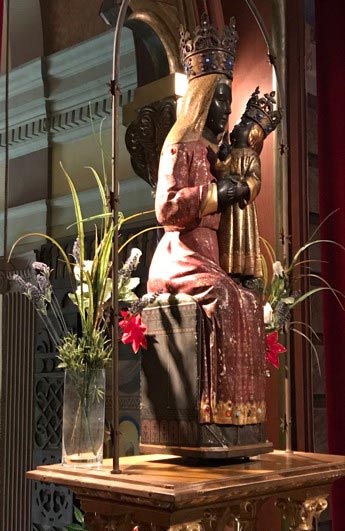 Lady of the Garden 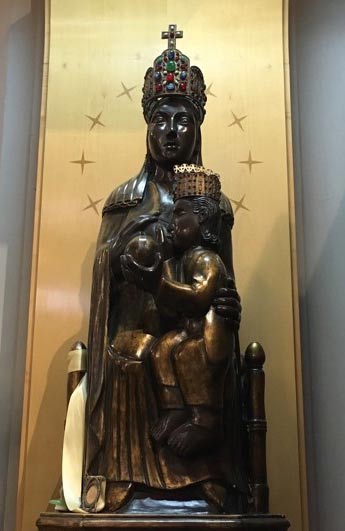 Lady of the milk 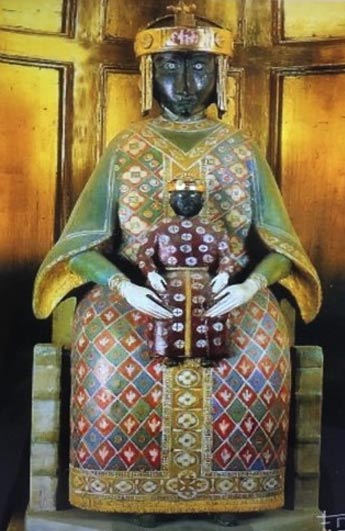 Exercises for the Soul
every second Monday, 7:30 pm
Cameron Church at Pearl and Iowa
Next meeting January 14, 2019

(Please come to bestow good wishes upon John prior to his knee surgery on January 29 at St Joes. We are all praying that John’s bionic knee will be just the thing that sends him soaring to the upper room faster than Dave!) Remember to bring your Nativity figure to delve deeper and deeper still into the meaning of not just your icon but those of all of Bethlehem as we decipher their interior meaning for the year to come. John Lee to facilitate.

Book Group: “Who do we Choose to Be” by Margaret Wheatley Next meeting January 24 (chapter 3) at the home of Nancy Arko Email nancyarko@comcast.net for directions

Mark your calendars for The June 5 Day Seminar June 26-30 “Living from Possibility: A Spirituality of Wisdom and Imagination” Easy Yoke Ranch in Beulah, Colorado

Watch denverguild.org for a possible one day seminar this spring!

“Do not be dismayed by the brokenness of the world. All things break. And all things can be mended. Not with time, as they say, but with intention. So go. Love intentionally, extravagantly, unconditionally. The broken world waits in darkness for the light that is you.”
L.R. KNOST 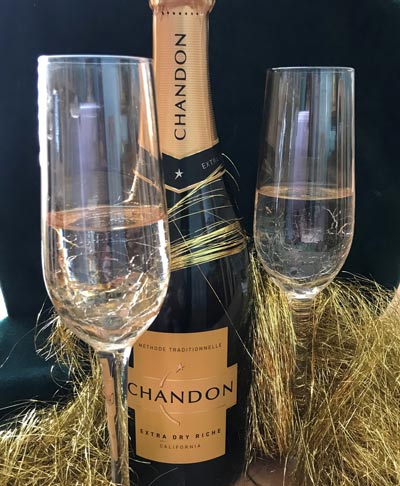 Exercises for the Soul: Monthly meetings of the Denver Guild take place on the 2nd Monday of each month at Cameron Church 1600 South Pearl St @7:30pm 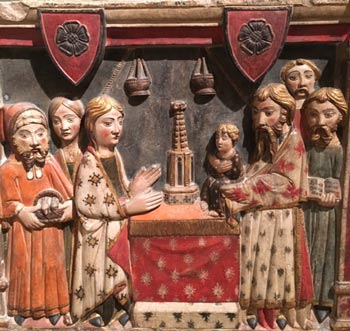 For a full listing of events and mission please visit denverguild.com

Contributions to the Newsletter are encouraged and can be sent to nancyjoarko@gmail.com